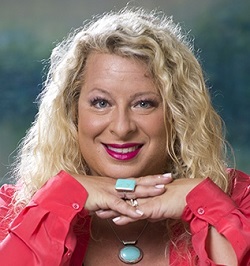 As a Holistic Psychotherapist., Life Coach and Speaker, with a busy practice in Toronto, Canada, Victoria draws on a wide range of philosophies and modalities applying her own concept of “self-culture”.   Victoria has helped countless people move past depression, anxiety and with her proven protocols and techniques; she has helped so many discover their authentic selves and create the lives they were meant to live.

Born in Montreal and having grown up in Rio de Janeiro, Brazil, and Lisbon, Portugal, to a Portuguese Catholic mother and a Romanian Jewish father, Victoria today finds her home in Toronto, Canada, with her beloved husband of twenty-two years. Her influences include Buddhism, shamanism, osteopathy, physical fitness, music, theater, visualization and meditation, as well as modern and traditional psychotherapy.

In 1990, after the death of her father, Victoria returned from living in Cozumel, Mexico, where she was exposed to the subtle yet magnetic energy of the Mayan Indians. There she was exposed to hands-on energy work. Her return to Toronto set her on a journey of spiritual and emotional self-discovery that included a stint in the theater, where she wrote, starred in and produced a number of soul-exploring plays, including the critically acclaimed play Coming Out of the Fridge, a serious comedy about eating disorders and body consciousness.

At the same time, she studied a plethora of holistic body-centered modalities, including reflexology, therapeutic touch, craniosacral therapy, reiki and her beloved and phenomenal polarity therapy. This mélange became the foundation of her busy private holistic practice in Toronto, which beckoned the need for a master’s degree in educational psychology as her practice began to evolve past the body and into the realms of emotional transformation. This became the basis for her brand of holistic psychotherapy, which works with the mind, body and soul to effect monumental change in her clients’ lives.

This book is a work of passion that began in 2007, when she started recording videos on YouTube (www.youtube.com/askvictoria) about various topics that were delved into at the office. The public’s response has been incredible and she has over 80 videos that have garnered over 370,000 views and counting as the hunger to find one’s self-culture continues to be a key for people who are on a quest for self-love and happiness. The transcribed videos became the foundation for the chapters in this book.

Today, Victoria is thrilled to bring the work she does in her office to the world at large, where people can use the case studies, teachings and exercises in this book as they go on the path toward finding their self-culture.