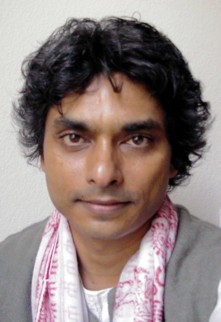 Russill Paul is author of the ground-breaking literary work Jesus in the Lotus and The Yoga of Sound: Tapping the Hidden Power of Music and Chant (New World Library) and the music producer of several acclaimed chant CDs through The Relaxation Company, NY.

He trained simultaneously as a monk and yogi under the direction of the renowned sage and mystic, Bede Griffiths, in South India for close to five years and has taught in gradutate and post-graduate spirituality programs for 17 consecutive years. He presents his work on sonic mysticism at prestigious retreat and learning centers nationwide.

Spiritual Training and Education (23 years)
A native of Chennai, South India, Russill Paul took to playing stringed instruments from the early age of four and began professional music in his teens. Although he was born and brought up in a Christian family, he developed a keen interest in Indian spirituality in childhood that has guided him into the present day.

In 1984, he underwent a powerful spiritual transition that motivated him to begin living the unusual combination of a Benedictine monk and yogi under the direction of Dom Bede Griffiths, a pioneering Benedictine monk and revered sage who directed Shantivanam, a Christian monastery that expressed itself through the spiritual and yogic culture of India.

During the five years he spent as a monk, Russill Paul immersed himself in the sacred culture and spirituality of India’s esteemed heritage, studying traditional Sanskrit chanting and South Indian classical music as well as yoga, meditation, philosophy and cosmology. In addition to his training at the monastery, Russill was initiated into the sacred learning of Sanskrit and Indian music in several ancient temple cities of South India enabling him to develop the tools related to his lifework: The Yoga of Sound.

Russill has presented his work at prominent academic institutions, such as: Western Michigan State University and The Fetzer Institute in Kalamazoo, MI; Illinois Benedictine College in Lisle, IL; The California Institute of Arts and Crafts in Oakland, CA; and the Chicago Graduate Institute of Clinical Psychology in Chicago, IL, to name a few.

Russill Paul has been presenting workshops and retreats throughout North America at leading-edge institutions such as The Esalen Institute in Big Sur, CA, the Omega Institute of Holistic Studies in Rhinebeck, NY, Kripalu Center for Yoga and Health in Lennox, MA, and Hollyhock in Cortes Island, British Columbia, Canada.

He has also been featured as a presenter at prestigious conferences, such as: The Parliament of the World’s Religions that convened in Chicago in 1993 and in Barcelona in 2004, New Age Journal’s Body and Soul Conference in San Francisco, The International Sound Colloquiums in Colorado, Omega Institute’s Awakening the Soul in NYC, The Christian Meditation Center’s John Main Seminars in Toronto, Canada and San Francisco, U.S.A., and the Synthesis Dialogs at the Norbulinka Institute in Dharmasala, India, residence of His Holiness the Dalai Lama.

Music Industry Professional: Recording Artist and Record Producer (20 years)
Russill Paul has been involved with the music industry for over two decades, recording movie sound tracks under well known music directors in South India as well as recording and producing a wide selection of his own world class recordings in the United States that are distibuted worldwide.

He is presently associated with The Relaxation Company in New York, a leading publisher of healing music products, and New World Libary, a highly respected press in Novato, CA. He was formerly associated with Rising Son International, Arlo Guthrie’s record label in Massachusetts.

Russill Paul has performed his unique style of music at many prestigious concert venues such as the premier European classical music venue Propstei Sankt Gerold in Austria, Chicago’s Grant Part and Medinah Temple, The Sports Auditorium in Sheffield, England, and the Music Academy in Chennai, India.

He has also performed on several occasions for His Holiness the Dalai Lama in India as well as in America and has shared the stage with music greats such as the legendary American folk-singer Arlo Guthrie and British rocker Arthur Brown.