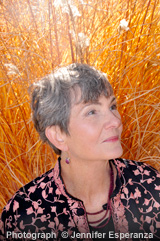 winning author. Nina is retired from a successful career asNinaPresident of a company she formed to assist women in establishing business enterprises. From there, Nina acted as a consultant and leader in the field of alternative medicine, collaborating to form a company to bring neurosensory diagnostic tools to injured veterans who suffered brain impairment in the Gulf and Vietnam. In 2008, Nina moved on to consult for Stardreaming, in Santa Fe, on the cosmic center’s preservation, maintenance and expansion, with the goal of creating a sacred centre and mega-stone labyrinth for healing and transformation. She was successful in attracting funding for the fullest expression of that vision.

Nina has been acknowledged for her pioneer work. In 1995, she was appointed by President William Clinton to represent him at the White House Conference on Small Business. The next year, she was chosen as a Charter Member of Pennsylvania’s Best 50 Women in Business. Between 1990 and 1996, she was published in the Philadelphia Tribune Magazine, Women Lawyers Journal as well as being featured in U.S. News & World Report, Money Magazine, Inc. Magazine, Business Week, Venture Capital Journal and was on the cover of Business Philadelphia. During that same time period, she consulted for Dun & Bradstreet Information Services, the US Department of Commerce, the Pennsylvania Department of Commerce and Penn State University.

Speaking engagements include US House of Representatives Field Hearings, Pennsylvania Department of Commerce, the League of Cities Women’s Caucus, Wharton Executive MBA Reunion, and keynote speaker for the Entrepreneurial Women’s Expo. Interviews have included Voice of America, WBEB 101.1, WCZN 1590 and WFIL AM.

Early in 2009, Nina was guided to attend an Earth-Keeper event with the intent to support planetary healing. Shortly after, with the encouragement and insight of James Tyberonn, she began receiving information about how to work with Phi Vogel Crystals for recoding DNA, about who she is from an expanded soul-perspective and the role she is to play in facilitating planetary ascension.

Nina has been recognized by Archangel Metatron, via Channel James Tyberonn, as an Ascended Master. Metatron described Nina as a Master Soul who has completed the reincarnational cycle and chose to ‘Walk-In’ to upshift and recode the DNA of humans & dolphins to the Crystalline Frequency. She is an ‘Internal Walk-In’, having received the full energy of her ‘Ascended Self’ during her 49th year. A true ‘Walking Master’ who exudes unconditional love from her enormous Crystalline-MerKiVic Auric Field.

In November, 2009, Archangel Metatron directed Nina to work with a powerful 144 Vogel Phi Crystal. Archangel Metatron explained that this crystal is a sentient conscious being as well as a highly capable Atlantean-Sirian-Pleadean precision tool. Nina ceremoniously welcomed the Vogel Crystal into her life and received the following information:

“Dear One, the welcome is to you. Welcome to the new expanded world that you just entered. The limitations are none. The boundaries are none. As there are none other like me, I represent the limitless, the Infinity Consciousness that you are and humanity is becoming… You ask my name – Anaya-Ra…”

Shortly after, James Tyberonn expressed, “Nina, the name given to your Master Crystal, Anaya-Ra, is also your spirit name… it is your energy and frequency. You are Anaya-Ra, Crystal Singer of the Cosmic Council of Light.” He further explained that Anaya-Ra is a Star-Seed and channel of the Divine Feminine Matrix in perfect harmonic balance with the Divine Masculine to form the Crystalline MerKaNa Star of Integral Sacred Unity.

Above all, Nina has surrendered her will to the Divine and lives each day by divine guidance. As Anaya-Ra, she now devotes her enormous energies full time to her sacred spiritual mission. As the needs of the collective shift, what is asked of her evolves, and this beautiful work unfolds.