Dane Stevens was living what by most standards would be considered a highly successful life–running a prosperous business, living in a beautiful home, making good money, traveling and generally enjoying his life-despite having suffered incidences of traumatic childhood sex abuse. The only area of his life that was under-performing was his relationships — which were consistently short-lived.

So in an effort to explore whether that could be transformed, he sought out a recommended therapist/healer to resolve it, but in an intention to release the energy that was trapped in his body, she inadvertently released a bombshell of energy that took over his life, instantly flooding him with fear and out-of-control energy that was un-quenchable. It felt like he had been plugged into a 220-volt outlet with his nervous system unhinged. Three years later, he had lost everything and was homeless.

Living in his car and or in the houses at night where he was doing construction, he committed to finding a way back. He sought answers from books, counselors, psychologists, psychiatrists, coaches, gurus, courses, and after five years, he finally stumbled upon something that allowed him to get to the heart of his suffering and connect with it.

That trial-and-error resulted in the Neuro Trauma Healing Process (NTHP) which bridges the divide between the hurt-and-wounded child inside that is sabotaging one’s life and the conscious being. Using a left/right brain process that allows one deep self-compassion and inquiry, NTHP, and its companion Soul Re-Cognition Process (SRC) are highly successful trauma healing methodologies that are now being taught around the world. His new book Reclaim Your Power to Create Your Best Life: How to Permanently Heal Unwanted Behaviors, Chronic Conditions and Addictions offers an answer to people who have tried everything and reached the end of their emotional rope. Developed out of desperation, NTHP is now providing the relief for far more people than Dane himself, who recovered entirely, and released the fight-or-flight programming that had so long been embedded in his cells and energetic body. 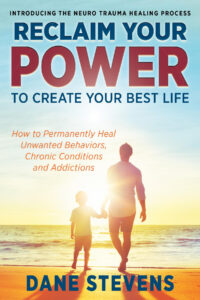 Being introduced to the public for the first time, the NTHP step-by-step process succeeds where many other modalities, therapies, healing techniques and behavior modification have fallen short–and achieves permanent healing. It is not a coping skill, a technique to overcome, a way to compensate or a medication that masks the problem.

The NTHP process makes the unconscious, controlling, frightened child feel safe. And once that happens, through continued gentle, loving, self-inquiry, the trauma energy dissipates and dissolves permanently. Using a form of gentle, deep self-compassion, you make an intimate connection with the wounded part of you, and re-choose your response to your experience and subsequent beliefs– bringing it into the present moment where it isn’t happening any longer, stopping the looping habits and fears.

But out of this remarkable clearing process came another windfall for Dane’s soul. As he healed, with the peace he was now experiencing creating new space in his life, it allowed a naturally growing connection to the higher consciousness, which began to flow through him with ease. That gateway has opened access to his Higher Self that gives him wisdom and guidance. This, too, is now experienced by the many who are practicing NTHP and SRC.

Says Dane: “The NTHP and SRC processes take another step in the evolution of our healing and spiritual development. They show us how we are working and give us the ability to heal our Self. They give us the keys to our life back, thus bringing us back home to our spiritual nature–becoming our own source again. This work has been called the next step in the evolution of our mental / emotional healing and spiritual development and we are proud to bring it forward with this book.”

The Neuro Trauma Healing Process melds the psychological, scientific, and spiritual together in a fusion of long-term, permanent recovery from any condition including trauma, chronic anxiety or fear, chronic pain, obesity, eating disorders, addiction, depression and or physical ailments.You’re no longer at the mercy of the subconscious mind and bullied into dysfunction any longer. Says Dane “I set out to write this book specifically for those who have negative experiences from their past that have had it turned into a life sentence…I wanted to tell them there is a way out.”